Zotrim have reduced the pricing from their official website to £21.95 for a one month package.

The cheaper pricing is to combat the high street diet pill pricing war that appears to be in full effect at present – which is good news for the consumer.

Until recently it would have been cheaper to buy in store at Boots the Chemist or Superdrug.

Zotrim have undergone a style transformation recently after recieving plaudits from that documentary, they needed to. 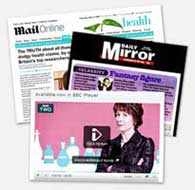 The BBC television programme Diet Clinic spearheaded by the rather frightening Professor Lesley Reagan shook the high street over the counter diet pill industry to its core by testing a selection of high profile diet products to see if they could substantiate their claims.

There were not that many products that came out unscathed. The one product that did survive and recieved almost muted approval was remarkably Zotrim.

Who would have thought a product that has been availble since 2001 would outlive and surpass products that are newly craeted today.

Zotrim has possibly the most scientific study and clinical proof attached to it compared to any other diet pill or slimming product available to buy over the counter.

The easiest way to attain clinical proof or doctor approval is to put the researchers on the pay role – a tactic used by the current wave of ridiculous American fat burners that are currently bombarding UK internet shoppers.

Zotrim on the other hand have some pretty unbendable establishments and authorities penning its independent reports with The British Food Journal and Kings College London among the authors, Zotrim is both clinically proven to aid the weight loss process and verified to be completely safe and side effect free according to the aforemention.

What Does Zotrim Do

Zotrim is an appetite suppressant that can reduce your appetite before, during and after a meal. It can also provide additional energy levels needed for mobility and exercise.

Oh… one last thing If you were to buy a 6 months supply of Alli (the new wonder diet drug) it would cost upwards of £250.