Alli The Diet Tablet That Works

The past year has been a massive one for all those connected with weight loss, diet and slimming. In particular GSK (GlaxoSmithKline) the producers of Alli

Glaxo with a large pot to dip into from an advertising perspective wasted no time at all in getting Alli onto our TV screens, radio and in the press.

On its first day of release high street stores such as Boots, Tesco and Asda sold out of initial stock levels within a few days.

Alli did come in for some criticism at first with some rather less that flattering comments regarding a side effect that caused some users the embarrassment and inconvenience of the Alli Oops (Oily discharge) – sometimes without prior warning.

The oily discharge issue was spun positively and quite rightly so as a testament to the fact that the diet tablet was actually working.

Alli is a fat blocker – the chemical present is Orlistat. Orlistat is the active ingredient in the most popular and widely prescribed diet tablet in history, Xenical.

The whole principle as to how Alli works is to prevent fat from consumed from being absorbed and digested by your stomach. The unfortunate proof of this is the oily discharge issue

The unabsorbed excess fat has to leave your body somehow and somewhere.

Like them or loathe them GSK have a diet tablet that actually works.

How To Buy Alli

Alli can be bought over the counter from high stores such as Boots and Tesco’s – buying in store is not entirely straight forward as it would seem as a BMI form has to be completed and handed to the in store pharmacist – this can on occasions lead to refusal as in order to be given Alli  you need a BMI of 28 or higher.

Purchasing online can be less of an issue – a BMI form still has to be completed but this can be done in the comfort of your own home and with the minimum of Fuss. 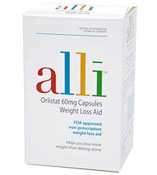 Alli is not everyone’s cup of tea – it is after all a drug.